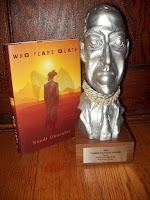 On Sunday, a friend of mine wanted to see my World Fantasy Award statuette. When he saw it, he was taken aback. He looked like he’d seen an ugly ghost.

“That’s a bust of LOVECRAFT!” he said.

Then he showed me a nice little poem that Mr. Lovecraft wrote about our people:

When, long ago, the gods created Earth
In Jove’s fair image Man was shaped at birth.
The beasts for lesser parts were next designed;
Yet were they too remote from humankind.
To fill the gap, and join the rest to Man,
Th’Olympian host conceiv’d a clever plan.
A beast they wrought, in semi-human figure,
Filled it with vice, and called the thing a Nigger.

What a nasty piece of poetry. My first reaction was fury on the level of my character Onyesonwu (think tornadoes, tsunamis…no, bigger like the red eye of Jupiter). I knew of Lovecraft’s racial issues, anti-Semitism, etc., but I never knew it was this serious. How strong the sentiment must have been within his soul for him to sit down and write that poem. This wasn’t racism metaphorically or abstractly rearing its ugly head within a piece of fiction, this was specific and focused. Who does that? Even in the early 1900s? That excuse of “that was just how most whites were back then” has never flown with me. The fact that a lot of people back then were racists does not change the fact that Lovecraft was a racist.

The first thing I did was consult the hive mind on facebook. And what a conversation ensued. Several authors (including Steve Barnes and Jeff VanderMeer) weighed in on the topic. See the conversation here. This discourse led me to ask the winner of last year’s World Fantasy Award for Best Novel China Miéville (he's also written and lectured extensively on Lovecraft) what he thought. He had much to say on the matter:

“Yes, indeed, the depth and viciousness of Lovecraft’s racism is known to me …It goes further, in my opinion, than ‘merely’ *being* a racist - I follow Michel Houellebecq (in this and in no other arena!) in thinking that Lovecraft’s oeuvre, his work itself, is inspired by and deeply structured with race hatred. As Houellebecq said, it is racism itself that raises in Lovecraft a ‘poetic trance’. He was a bilious anti-semite (though one who married a Jew, because, if you please, he granted that she was ‘assimilated’), and if you read stories like ‘The Horror at Red Hook’, the bile you will see towards people of colour, of all kinds (with particular sneering contempt for African Americans unless they were suitably Polite and therefore were patricianly granted the soubriquet ‘Negro’) and the mixed communities of New York and, above all (surprise surprise - Public Enemy were right) ‘miscegenation’ are extended and toxic.”


It’s not as if I haven’t encountered this issue before. One of my favorite authors is Stephen King. Yet, in several of his novels (including one of my all time favorites- The Talisman), he features Super Duper Magical Negros. That’s a very mild example. I certainly don’t feel that King hates black people.

I recently consumed and adored Norman Mailer’s Pulitzer Prize-winning masterpiece The Executioner’s Song only to then learn that Mailer was a raging and violent sexist and homophobe. I love Gabriel Garcia Marquez but just the description of one of his recent novels, Memories of My Melancholy Whores, made me want to hurl. Another novel tenderly featuring pedophilia, great.


And I love film almost as much as I love literature. What of the film that revolutionized film-making, Birth of a Nation? It was basically a piece of Ku Klux Klan propaganda. When I saw that film in college, I wanted to go out and punch someone and set things on fire and and blow things up. Yet, in terms of technique and narrative form, it was also a masterpiece.

This is something people of color, women, minorities must deal with more than most when striving to be the greatest that they can be in the arts: The fact that many of The Elders we honor and need to learn from hate or hated us.


Do I want “The Howard” (the nickname for the World Fantasy Award statuette. Lovecraft’s full name is “Howard Phillips Lovecraft”) replaced with the head of some other great writer? Maybe. Maybe it’s about that time. Maybe not. What I know I want is to face the history of this leg of literature rather than put it aside or bury it. If this is how some of the great minds of speculative fiction felt, then let’s deal with that... as opposed to never mention it or explain it away. If Lovecraft’s likeness and name are to be used in connection to the World Fantasy Award, I think there should be some discourse about what it means to honor a talented racist.

I loved China’s way of dealing with his “Howard”. He said:

“So where does that leave the World Fantasy Award? Well, in my case, I have always done something very specific and simple. I consider the award inextricable from but not reducible to Lovecraft himself. Therefore, I was very honoured to receive the award as representative of a particular field of literature. And the award itself, the statuette of the man himself? I put it out of sight, in my study, where only I can see it, and I have turned it to face the wall. So I am punishing the little fucker like the malevolent clown he was, I can look at it and remember the honour, and above all I am writing behind Lovecraft’s back. ”

I too am deeply honored to win the World Fantasy Award for Best Novel. It feels so so so right and so so good. The award’s jury was clearly progressive and looking in a new direction. I am the first black person to win the World Fantasy Award for Best Novel since its inception in 1975. Lovecraft is probably rolling in his grave. Or maybe, having become spirit, his mind has cleared of the poisons and now understands the err of his ways. Maybe he is pleased that a book set in and about Africa in the future has won an award crafted in his honor. Yeah, I'll go with that image.